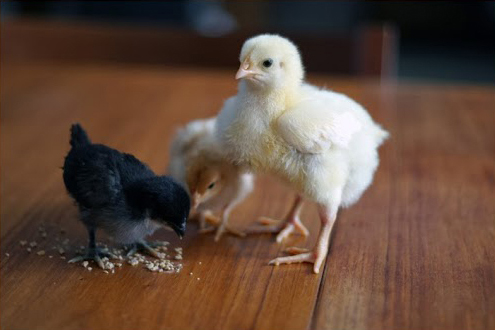 It is exciting to see backyard chickens so in vogue across the country. This is the time of year when many chicken-rearing households assess their flock and plot and plan for springtime chicks. In true gateway fashion raising hens has lead some of us to contemplate raising livestock for an additional food source. Meat birds seem like the next logical step. Knowing that an animal has been treated humanely and was raised without hormones and antibiotics is certainly appealing, but what does raising them really entail? This past spring The Husband and I decided to find out. 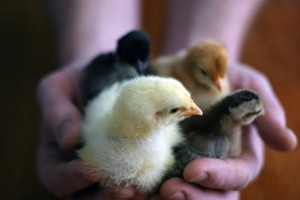 In March we bought our first half dozen Cornish Rock chicks. With two years experience keeping laying hens under our belt we approached this new endeavor confidently. We did our homework. We had lengthy discussions with our chicken Sensei at October Rose Farm. We strove to tilt karmic forces in our favor by building a mobile chicken pen out of an old Ikea bed frame. We researched tried-and-true chicken pasturing methods from experts on YouTube. We felt as ready as we’d ever be.

But a worry kept gnawing at the back of my mind. What about the end game? The dispatchment. Did I have it in me to see this thing through and do what ultimately needed to be done? Turns out I was right to suspect there was more to meat bird rearing than meets the eye: it has some undeniable, long term implications that a pursuer of this endeavor is wise to consider. Here is how it went down for us and, of course, my opinion about the whole matter.

Meat Birds Are Not like Egg Layers
Just after we got our Cornish chicks I had to be out of town for a few days and left bird-rearing tasks to The Husband. When I returned and peeked inside the chick corral expecting to see the usual fuzzy peeps dozing under the heat lamp I nearly had a heart attack: the chicks had doubled in size in three days and crowded the food dish like Walking Dead poultry zombies on the hunt for chick chow. The rapid growth of the Cornish breed was unsettling to folks like us who are used to the gentler growth curve of the egg layer. Egg layers progress slowly through their life stages until about the six month mark when eggs appear like magic in the box, and happiness and joy abounds; in contrast, meat birds reach butcher weight in six weeks (that’s weeks with a ‘w’). For over a hundred years this variety of bird has been selectively bred for one purpose: to put on weight as rapidly as possible. They are endlessly hungry, as evidenced by our entire adult Cornish flock regularly napping in the shade on summer afternoons with their heads propped in the food dish. 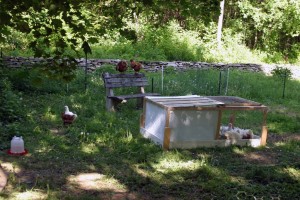 Let’s talk poop. Anyone who has ever mucked out a chicken coop is all too familiar with the stink chickens are capable of producing, but egg layer droppings are dainty and fragrant compared to the vast quantities of evacuant Cornish Rocks generate. These birds are poop machines. Our schedule for transporting them from the chick coral in the garage to the outdoor pen took an accelerated track due to them reeking up the joint. Once on pasture the situation was managed by moving them daily to fresh, absorbent grass, but it became clear that this daily move was not optional.  Cornish make a mess of the place fast. On the upside, our garden plot this spring will be smack dab in the middle of the spot the birds fertilized last summer. We anticipate one heck of a harvest.

Once on pasture the birds were easy to keep. We dragged their pen over fresh grass daily, fed them in the morning and evening, and kept an abundance of fresh water available. I observed no pecking order issues and no stress over their confinement – they didn’t pace the fence like my layers do when they’re caged. Heck, the Cornish birds 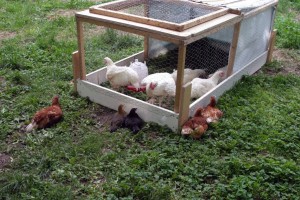 didn’t even seem to realize they were in a pen. They didn’t scratch or pursue bugs like our layers, and the one time I tossed a tomato into their food dish thinking they’d wolf it down like candy they ran away in terror and refused to come out of the corner until I had removed the offending produce. For goodness sake. They only showed interested in feeding, drinking, pooping, and napping. In terms of maintenance and care, the Cornish mix birds were, well, boring. My free range layers on the other hand seemed to know a chicken when they saw one and napped beside the meat bird pen every afternoon as if showing solidarity with their former flat mates. It made me a bit sad.

The Process
We’ve come to the part where I talk about dispatching the birds. Please skip ahead to My Two Cents if this does not suit your sensibilities.

Scalding the feathers off.

Our backyard setup included a homemade killing cone made out of hardware cloth attached to a deck post with a bucket of sawdust at its base, a large pot of 130 degree water on a grill, a plucking table, a [razor sharp] utility knife, a large container of ice for giblets, and a camping cooler packed with ice and water.

To dispatch the birds The Husband positioned the chicken in the kill cone and, with the utility knife, severed the jugular vein and carotid artery in a swift motion. He held the head to the side to allow the bird bleed out into the sawdust bucket (decapitating the bird entirely could cause the nervous system to seize and impede this bleeding-out process, resulting in tough meat). Once the blood drained he removed the head and carefully submerged the bird, neck first, into the pot of hot water just until the feathers dislodged easily from the carcass, about a minute. He then handed the bird off to me at the table where I dried my eyes on my tee shirt sleeve and got to plucking. In my opinion plucking chicken feathers is a miserable job. But it is preferable to the one The Husband took on so I kept my trap shut and pulled my weight. After the feathers were plucked we dressed the bird by removing the preening gland, organs and entrails. We retained the giblets, heads, and feet in a container of ice for stock. We rinsed each bird inside and out under a garden hose and put it in the cooler for an hour. Afterwards we pat dried the bird with a clean towel and vacuum sealed it for freezer storage. 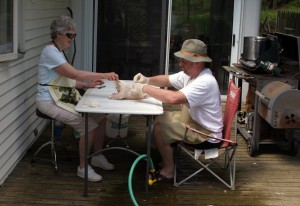 My favorite kind of plucking: when someone else is doing it.

Immediately following the slaughter I rinsed the giblets, heads and feet under running water and put them in a large stockpot with raw vegetables, fresh herbs, and water. I brought the pot to a boil then reduced to low for about 12 hours. From these parts we garnered 10 quarts of chicken stock that we pressure canned the following morning.

My Two Cents: Why We Do It.
We embarked on this endeavor because we wanted to reclaim the responsibility of feeding ourselves to the greatest extent possible. In the process we discovered that there is solemnity in the act of taking livestock for food, and it has made us far more conscientious consumers. Because we are so invested in this food source we are loathed to waste any part of the animal; nothing goes unused. Would we do it again? Absolutely. In fact, a few weeks after processing our first batch we started a second, and plan to repeat the cycle this spring. The quality and flavor of the meat is superior by far to the mass produced meat from the grocery store. 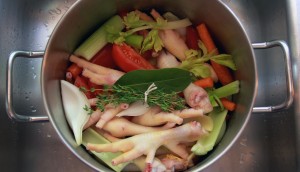 How Do They Sell It So Cheap?
The big grocery store in my area regularly sell frozen chicken for .99 cents per pound, sometimes sixty-nine cents when a sale is running. As a raiser of meat birds this dumbfounds me. It costs roughly $1.50 per pound to raise and harvest our pasture-raised birds, and we do not have to pay employees to process the meat or buy fuel to transport it to market the way confinement factories do. Theenvironmental, dietary, and pharmaceutical conditions under which dollar-per-pound chicken is possible should be cause for alarm, not celebration. Raising our own birds has informed my conscience, turned us off to mass-produced chicken, and given us renewed respect for our local farms who do things right. 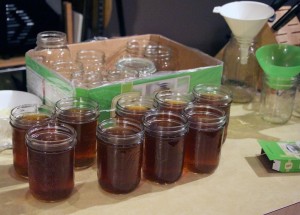 We Need To Do More Than Complain.
Most modern omnivores are so far removed from the reality and nature of their food that any knowledge of the production or slaughter, even the most humane, is upsetting. But the shrink wrapped poultry in the grocery store and Fast Food 10-piece Nugget Meals did not spring forth like flora independent of requisite death; somebody had to do the difficult work. Every time we spend a dollar on our food, be it on food processed on intensive animal farms, or on local organic farms, or to raise and grown on our own land, a vote is cast for how we want our future food system to look. 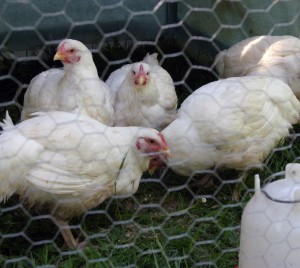 It behooves us therefore to understand what we’re buying into, and to pony up and learn how to do as much of it ourselves within our local community as we possibly can.Cornish Birds Don’t Act Like Chickens.
There is no breed of chicken on the planet that matures as fast and produces the amount of quality meat as the Cornish cross, but a factor that I continue to struggle with is the fact that modern humans have created, with Frankensteinian hubris, a breed for our consumption that grows so quickly it can be a danger to itself and is incapable of propagating on its own. Cornish crosses just don’t act like chickens; it is as if we’ve bred the chickenness out of the chicken. I’m still trying to decide whether the good life we provide for our birds compensates for contributing to the perpetuation of this Cornish cross breed in the first place.

The bird at center has elected to nap inside the food dish on top of the chicken crumble.

We will raise meat birds again, no question, but the jury is still out on which breed we’ll choose this time around.

What about you? Have you raised meat birds? What breed did you choose?