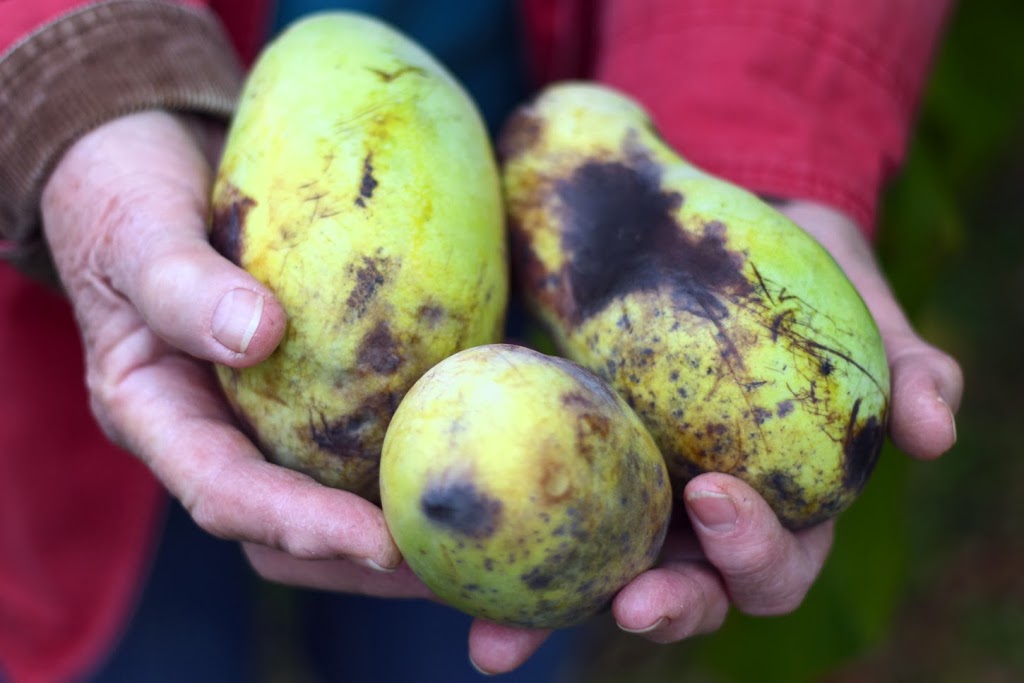 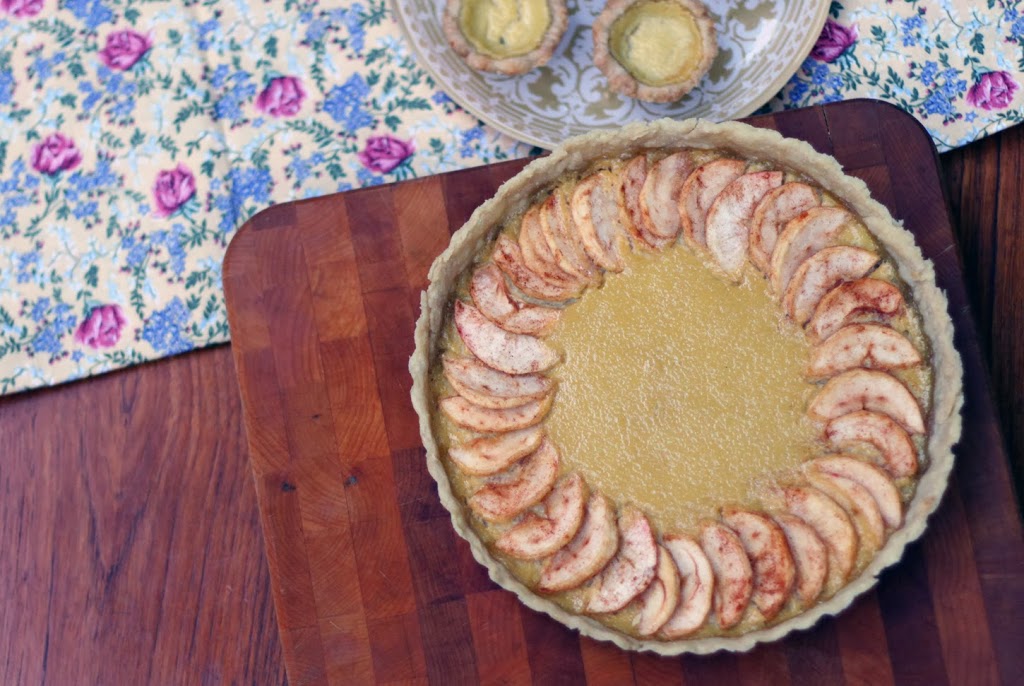 I watched two incongruent, yet weirdly related, videos this month that have incessantly occupied my thoughts. The first was a Netflix special featuring a well-known stand-up comedian who performed a sketch about God being annoyed with humans for digging up fossil fuel to mass-produce food rather than eating the stuff He’d left for them all over the ground. Human’s excuse for this behavior? The food on the ground doesn’t come fast enough, and it arrives cold. 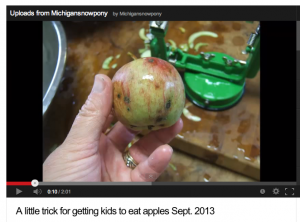 The second video, uploaded by Michigansnowpony on her YouTube channel, describes how the apple trees on her property yield chemical-free – but often ugly – apples, and how her kids see for themselves how perfectly good and delicious the underlying fruit is by using an apple peeler to uncover it (underscoring my conviction that everything we need to teach our kids about life can be accomplished in the kitchen). Her video got me thinking about those wax-covered, mealy things I’ve purchased at the supermarket. Flavor is secondary to appearance in the US and it seems like the more toxins we spray all over something to ensure long-distance shipping the better we like it.
Homo sapiens can be flat out goofy sometimes as evidenced by the staggering amount of energy we expel making our food surface-pretty. I wonder how much we could save if we’d just be willing to accept the deliciousness of the underlying product even when the covering isn’t as beautiful. And it turns out there really is a lot of food just laying around on the ground waiting for us to pick it up. Of course we have to be willing to go out and look for it. And see past the ugly.
Pick a Pawpaw
Thanks to Baloo in The Jungle Book movie I grew up believing pawpaws were a tropical fruit. In fact, pawpaws are the largest tree fruit native to the US, growing wild in 26 eastern states. Sometimes referred to as Forgotten Fruit, pawpaws defy the modern mass production system. This is because the fruit will not ripen if picked prematurely and the skin is so delicate that shipping it long distance is not cost effective. So to truly know the pawpaw is to wait for the skin to turn an off-putting brown, allow it to fall from the tree on its own accord, and retrieve it from the ground before any animals get to it first. Since humans are particularly bad at waiting, not judging books by their cover, and picking up after ourselves, few modern humans have tasted the pawpaw. 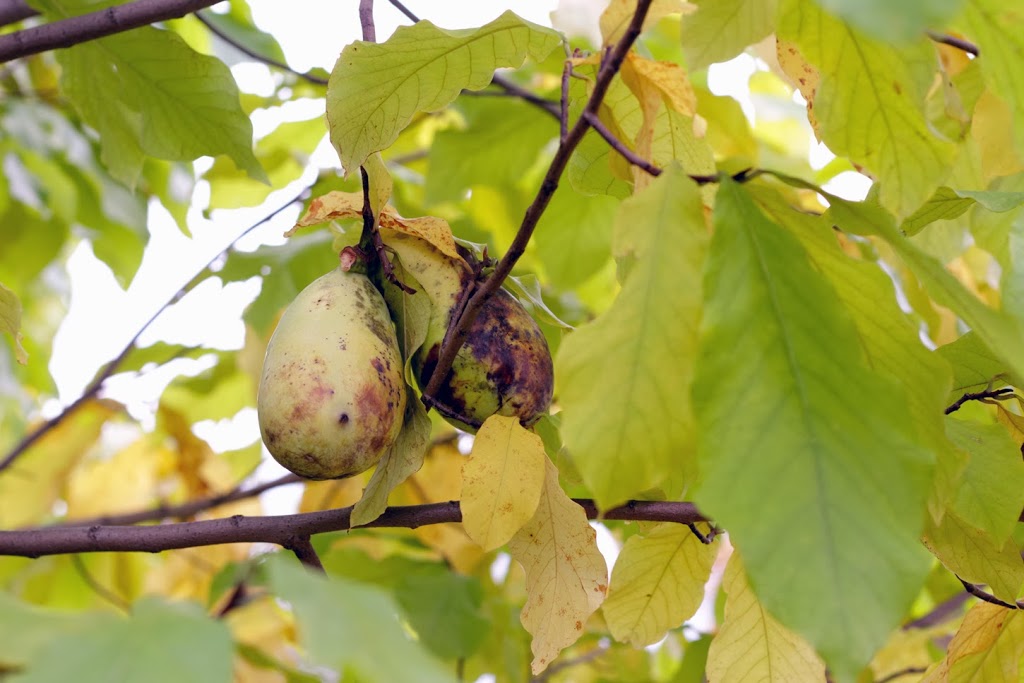 And that’s a shame because the fruit is delicious and nutrient rich. Imagine the outcome if a pineapple, peach and mango had a love child.  That is a pawpaw. It’s flavor is similar to all of the above, and it has a velvety, custard-like consistency not unlike an over-ripened peach. It can also be a persnickety, conditions-dependent fruit, so frequently those who grow pawpaws have scarce extras to share. But this season we were fortunate to inherit some by association: the Mother In Law had a bumper crop from her two backyard trees and sent us home with armloads. We scoured the internet for recipes and baked ourselves pawpaw tarts. 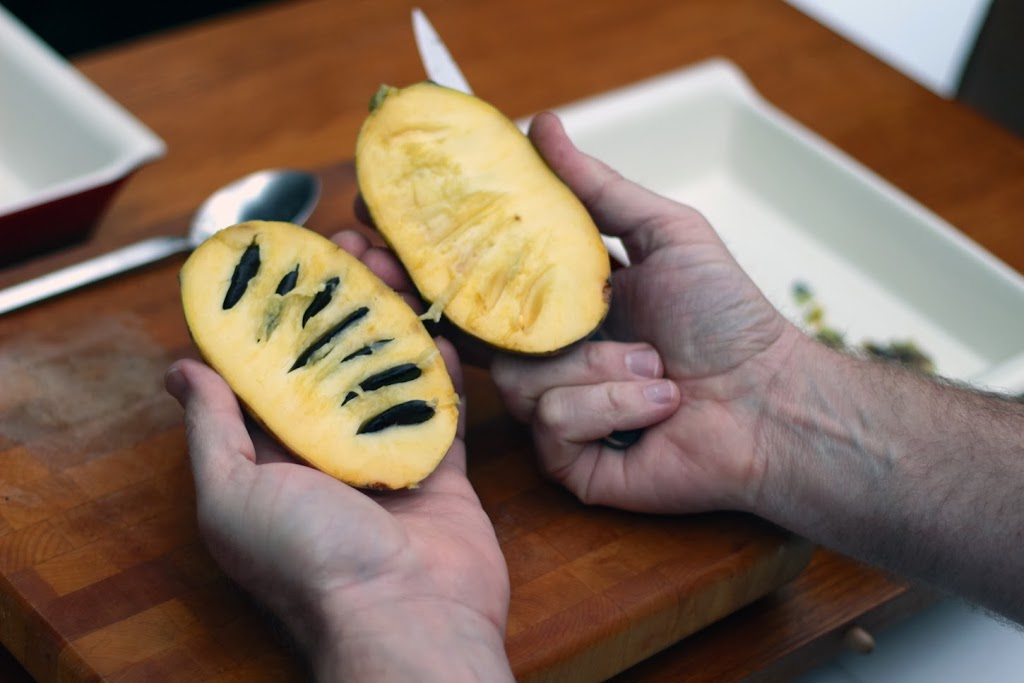 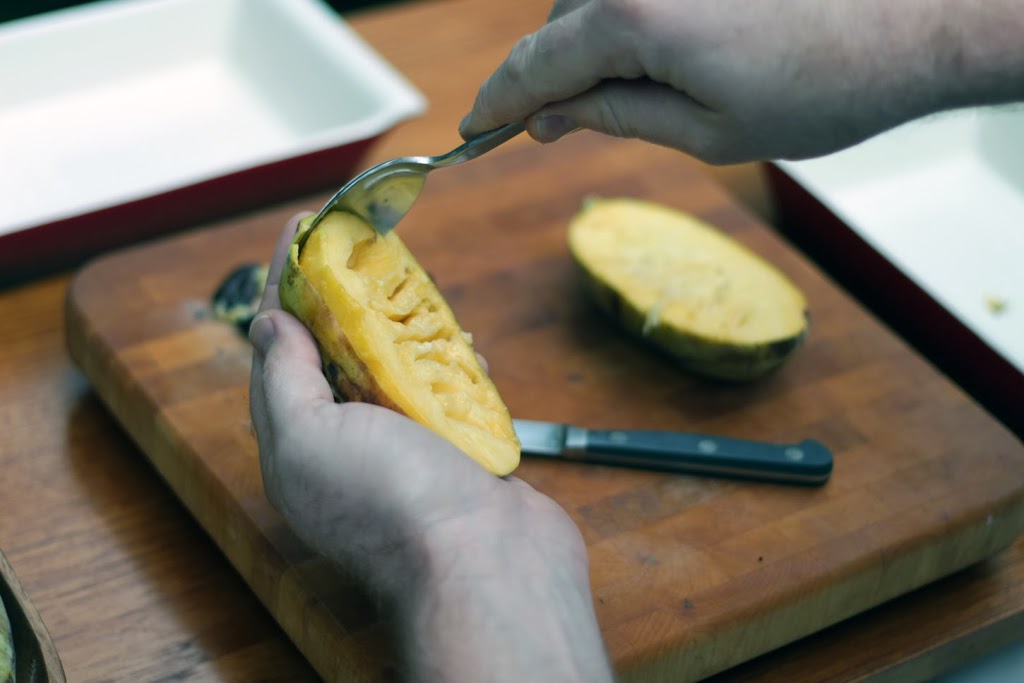 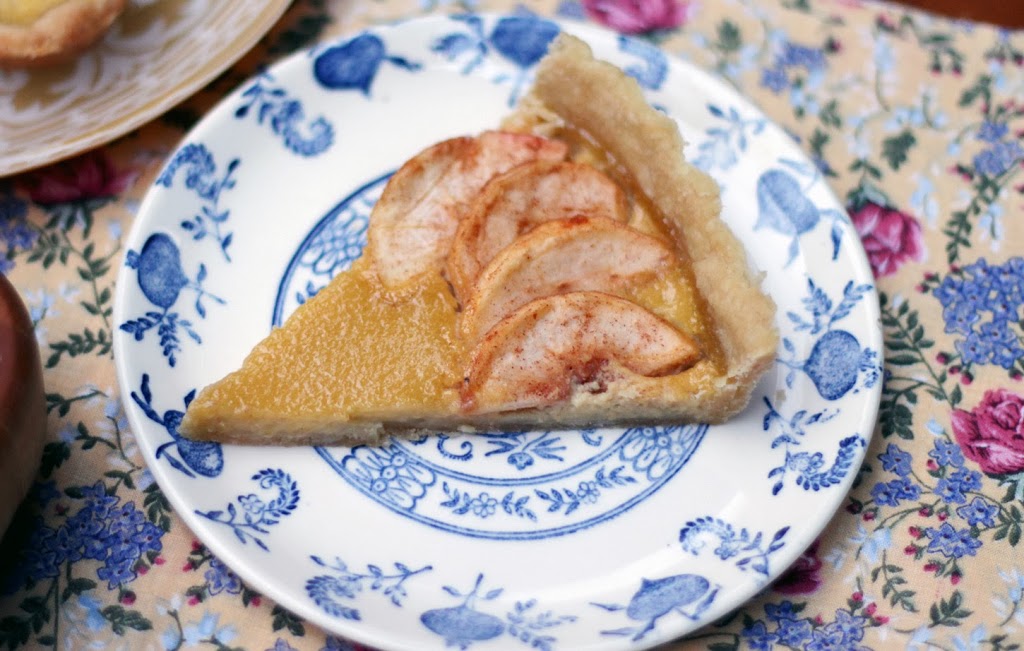 All Wild Apples are Handsome
This year the apple yield in the wild orchard near our house was staggering. You could smell your way to it when the breeze shifted, a sweet and slightly fermented aroma. We spent the morning one Saturday hiking to it and found the orchard grounds literally blanketed in fruit, almost all of it pre-enjoyed by deer, rodents and worms. The fruit still clinging to the trees, however, was fresh and titillating and The Husband called out a warning before giving it shake, pummeling us both in a shocking cascade of falling fruit projectiles. We laughed until our sides hurt, scaring off every animal within a five-mile radius and carried home a sack stuffed with wild fruit. 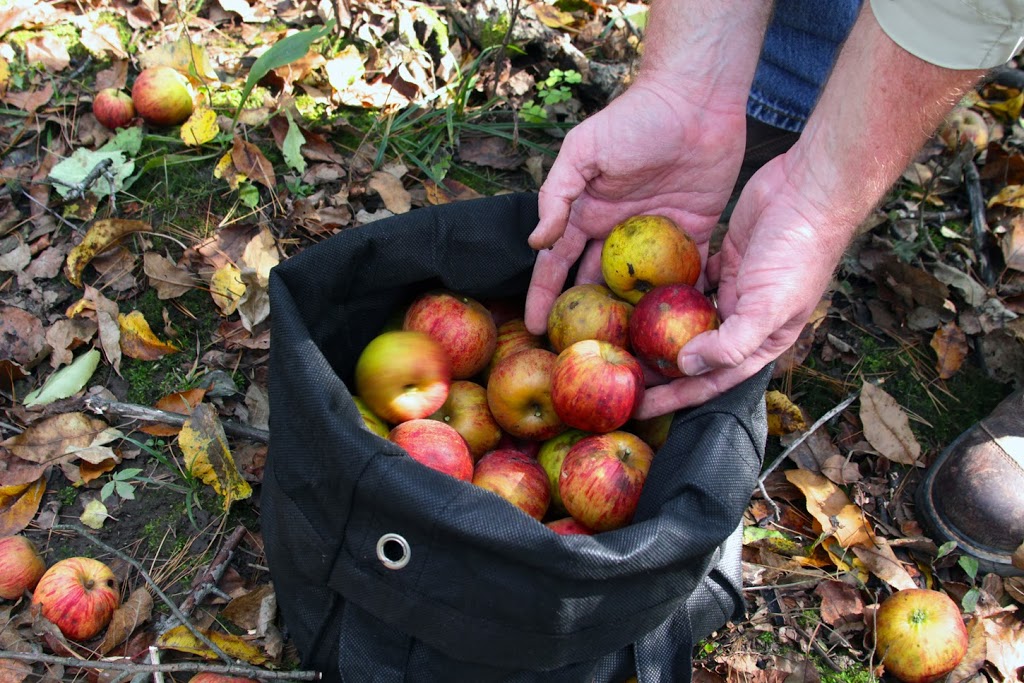 Aw, Nuts!
When it comes to ugly food nuts have to be way up on the list. Not just because they can appear gnarly and worm-bitten on their surface and are a mess to clean, but also because all that effort is just the precursor to cracking the shells and harvesting the fruit. But nuts are abundant in our area, delicious, and free, so I can be persuaded to put in the requisite effort. Our trek through the woods yielded a full bag of black walnuts and hickory nuts. I scrubbed away leathery exteriors, soaked the shells until smooth and clean, and spread them out on a screen to dry overnight. The next morning I found two thirds of my bounty missing. Gone. In their place I found a snarky note in wobbly handwriting that said, “Thanks for all the hard work, sucka’!” It was signed “Your Friends, The Local Squirrel and Chipmunk Association.” 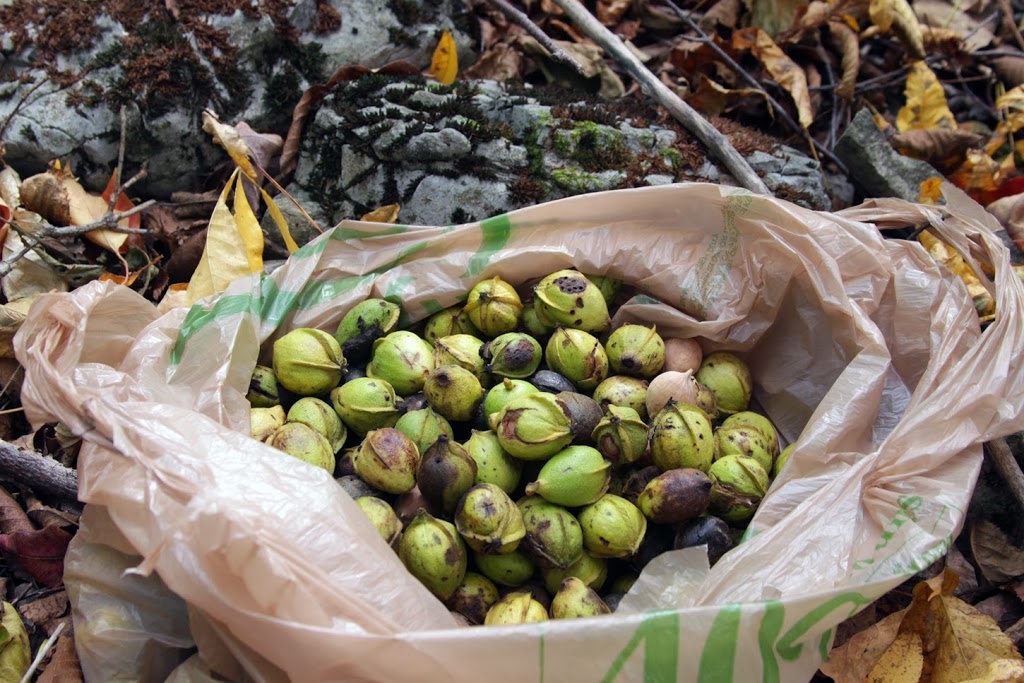 Drat those confounded rodents! I gathered the lousy five remaining black walnuts and scarce handful of hickory nuts and threw them into the pantry, disgusted. The painstaking task of cracking them and picking fruit from shells will have to wait for a low blood pressure day.
Which probably won’t happen until after the holidays. 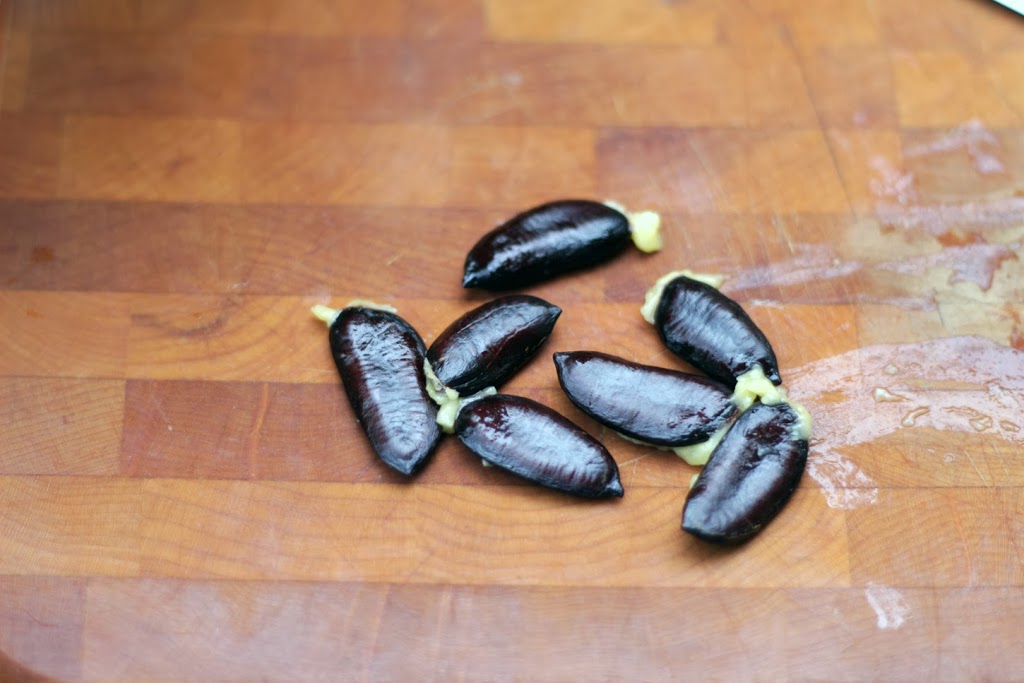