Salad, Silkies, and a Wall.

Weeks have passed since I’ve had a free day to get outside and take inventory of the work we’ve put into this place. Could that explain the melancholy? The second the rain stopped yesterday I grabbed the camera and took off with the dog for a long explore. Bliss. 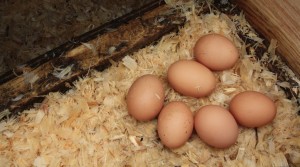 Our pallet garden shows signs of basil and summer salad greens. The last wild strawberries are coming on and the black raspberry bush is loaded – next week we’ll make jelly. The husband’s herb garden is taking shape and after a false start with lousy soil arugula is finally springing up in the pots on the deck. I tossed a handful of apple scraps to the ladies as I passed which they completely ignored until my back was turned. Our hens are touchy these days on account of us restricting their wayward excursions with a fence. But we were mindful: the hen yard is now so large the grass doesn’t show a sign of stress even after three weeks of poop and pecking. And despite their huffy attitudes we still win: I’m collecting eggs from the nesting box again.

Speaking of ridiculous chicken behavior, we got three more. In terms of poultry, can you ever really have enough? These fussy little silkies serve no earthly purpose other than to amuse The Girl. On my birthday last weekend the State Fair held a poultry show and I pinky-swore I would find a source for a silky chick (note: “A” silky chick. Singular. Numero uno). As fate would have it we encountered a crate full of for-sale baby silkies for cheap and next thing I knew we were carting three home: two I vaguely remember agreeing to plus a “bonus bird” – the runt of the litter who was just a woebegone, bedraggled little thing the seller threw in for free because it was on death’s door anyway.
Gee, thanks. Obviously The Girl latched onto the ugly runt (who has since been christened “Noodle”) with a vengeance. At first the poor thing slept standing up because the other two pecked it when it sat down and the second it fell asleep on its feet they would pick out its neck feathers. I read up on this and learned the runt of the chicken litter often dies of sleep deprivation due to this pecking-order horror show. So The Girl took matters into her own hands. She wrapped Noodle up in paper towel and carried it around in her shirt where it slept safely and warmly for hours every day. The silly bird has put on weight, now sleeps in the huddle with the other two, and has developed a gigantic attitude in the chick corral.
I call it Noodle Bonaparte the Third. Surly it will turn out to be a rooster. Good lord, are silky roosters noisy? I hope not for the neighbor’s sake. Because there’s no turning back on it now. 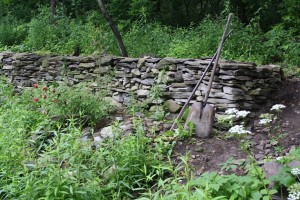 Aside from all this my wall is waiting. I finished the longer section and now have the steps and the short side to assemble. It’s a wicked heap of rubble but enough is enough; it will be finished by summer’s end.
Bliss. 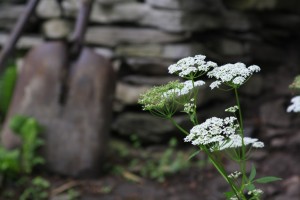