Experience has taught me any odd noise from the hen yard is a bad thing, something to investigate right away. So when late yesterday I heard an unfamiliar commotion I rushed out to see about the ensuing mayhem. Sure enough Noodle Bonaparte was inexplicably inside the hen yard and being pecked mercilessly by a trio of hens; furthermore, she’d gotten herself stuck half way through a little lattice hole which any sighted creature would have realized was far too small to pass through.

It only took a moment for The Husband to reach her but by then little Noodle was a motionless pile of fuzz. Oh no, I thought. We lost one.

Not dead, just frozen in terror; the instant he scooped her up Noodle began flapping in fright.

We decided then and there to liberate our silkies from the plume that simultaneously served as their most prized feature and source of blindness.

The Husband and The Girl performed the delicate procedure. Once the feathers began to fall away the birds went uncharacteristically still. Chickens, it turns out, enjoy seeing. I’ve decided those fuzzy feathers are a hazard, not to mention pure meanness. We’ll keep the girls trimmed from now on.

Because there is nothing ridiculous at all about chicken haircuts. Good Grief.

And now for something completely different.
Sending a humungous happy birthday to my little brother Jason! Incredibly, his dear friends Tim & Trinity convinced him to spend his 38th  21st perspiring and making contact with dirt – two things I’ve not seen him do since approximately preschool. The Threesome raised money for St. Jude Children’s Hospital and ran as St. Jude Warriors in the 2012 Warrior Dash in Windam, NY. What is a Warrior Dash you ask? Oh, just a 3.2 mile hobbyjogger mud run, with 9 diabolical obstacles standing between racers and a finish-line brewsky. This year’s run was performed in pouring rain slash baking sun alternatively so it was Even. More. Awesome [for the runners].

As fun as it is to witness the main event, for a Looky Lou like moi Warrior Dash crowds are a people-watchers paradise. I saw Jesus give a piggyback ride to a banana, a gaggle of mohawked Scotts hacky-sacking with a clown, and – most importantly – I found Waldo. Just after a torrential downpour I watched a faux-buff boyfriend futilely seek dry ground as his bronzed beloved whined in a jersey accent, “Danny, I said I do not want to get my feet muddy!” Oh Danny. Mud is just one of many problems Miss Maintenance demands you solve in life, isn’t it? 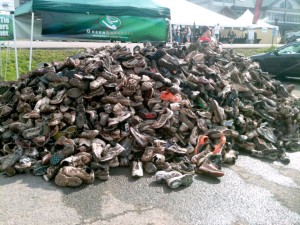 The rain could not dampen the crowd’s finish-line enthusiasm. We cheered for them all: wedding parties and confederate army soldiers; mud-caked hula girls and cat-whiskered super buffs in speedos.  As for our own Beer-socked Trio: they finished in 1,173 place with a time of 1:48:11 while appearing jaunty and fabulous as anyone who knows them might expect. They celebrated warrior-style with lousy beer and turkey legs. Perfection.
So Happy Birthday to You, Jay, and many, many more (*jazz hands*)!

(above) Runners donate their
shoes to charity 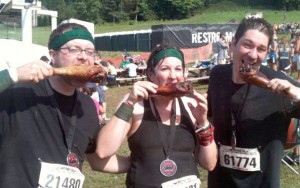 Warriors at the Finish Line 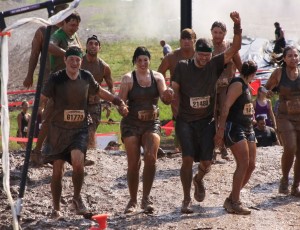 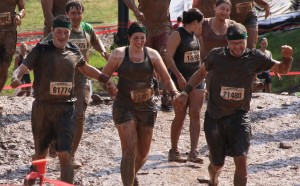 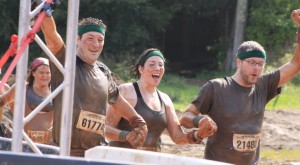 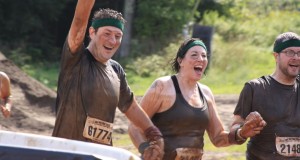 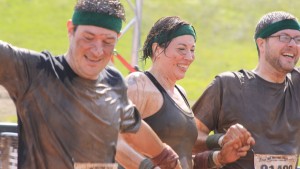 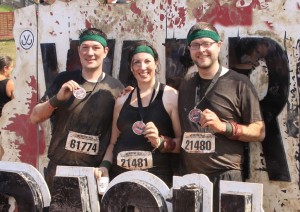 The broody hen saga has come to a peaceful end. BP was emancipated after four days in confinement. She emerged a bit loopy which probably accounted for her wandering too close to the hen house and earning herself a swift and decisive reaction from her sisters as the accompanying video shows. By her second day of freedom she was far more interested in scratching for beetles than sitting in the stuffy henhouse and for one full week we enjoyed six daily eggs.
Then, The Molting.
One of the more innocuous sisters – a little red hen so drama-free we haven’t even named her properly – has suddenly begun to molt. Molting is the embarrassing phase in the feather-rejuvenation process; while we do not speak of it in her earshot we can hardly fail to notice the feathers all over the yard or the thinning of her wings. The web says laying hens usually molt in the fall but prolonged heat can trigger it early. Until her new feathers come in we’ll politely ignore her suspended egg laying and severely declined state of attractiveness.
In the meantime, there has been much activity in the pallet garden: